OneFeather is both proud and excited to be working collaboratively with the Mohawk Council of Akwesasne: Aboriginal Rights and Research Office towards resolving the 130-year-old land claim known as the Tsikaristisere or “Dundee lands”. OneFeather will be in community over the next few months coordinating community engagement, information sharing, developing educational materials, training community educators and facilitating eligible voter participating in the referendum/ratification vote once it is scheduled.

OneFeather has recruited, hired and trained local community members to lead these efforts toward a successful resolution of this historic event...there is much work to do, and we are honored to be a part of it. Here is the story behind this land claim...

"The territory known as the Tsikaristisere or “Dundee lands” is on the south shore of the St. Lawrence River roughly opposite Cornwall. It consists of approximately 20,000 acres in the most westerly portion of the Province of Quebec, in the area now known as the Township of Dundee. Historically, it was part of the land recognized as set apart for the Mohawks of Akwesasne". (Retrieved from a true story of great loss known as The Chain at https://www.mca-arro.ca/wp-content/uploads/2018/05/the-chain.pdf) 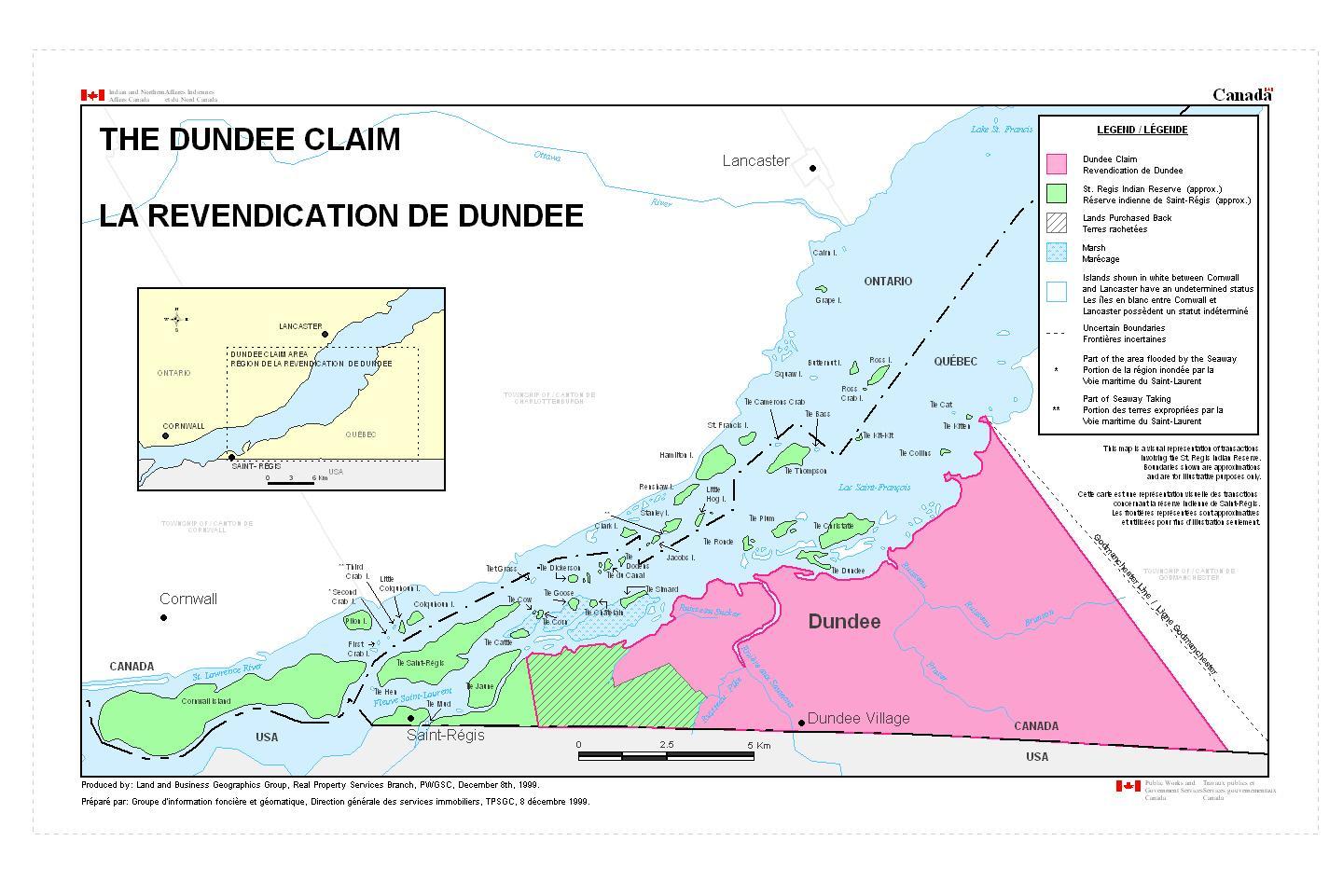 The story of the Dundee Land Claim is a long one, spread out over many generations. It began over 200 years ago with the steady encroachment of settlers onto this territory. Due to war on the lengthy sides of Akwesasne, French, British and Scottish settlers were eager to settle in Akwesasne. Seizing this opportunity to generate revenue for the community, Akwesasne leaders leased Indian land parcels through their intermediary, Indian Agent of the British Crown.

The Crown administered the leases, the majority of which were for periods of 20 or 99 years, with some leases even reaching 999 years! within 50 years, most of tsikaristisere became occupied by settlers. Despite liberal rental terms, most settlers become delinquent in making payments. Because the settlers were poor, the Indian Agent allowed them to make in-kind payments in the form of produce, trade goods, services, tools and even livestock.

Over time, the settler's debts continued to accrue even as the leases expired. The Mohawks petitioned the Minister of Indian Affairs, the Prime Minister of Canada, and even Queen Victoria. With leases expiring, several mohawks attempted to resume possession of their lands. However, this led to arrests for trespassing on the other side, settlers grew frustrated by their lack of rights afforded to other landowners in Canada. In 1831 Tsikaristisere had become the Township of Dundee. After many years, illegal deals and futile acts of resistance, the ownership of the lands was finally lost to settlers.

Most of the leased Tsikaristisere/Dundee lands were subsequently patented to private individuals. Between 1889 and 1927, about 10 per cent of the patented lands were purchased and returned to reserve status; since 1971, other lands within the Tsikaristisere/Dundee area have been purchased by Canada, but do not have reserve status. Part of the land is environmentally sensitive, and both Canada and the Mohawks of Akwesasne have stated their joint intention to protect those areas.

The Mohawk Council of Akwesasne (MCA) claim was partially accepted for negotiation in 1988 based on inadequate compensation resulting from the 1888 surrender, but these negotiations broke down in the mid-1990s. In the negotiations to be undertaken now between Canada and MCA, the parties will be seeking to resolve outstanding issues with respect to the alleged invalid surrender, the alleged inadequate compensation and alleged invalid leases.

For more information about how OneFeather can assist your community with its next vote - please contact us here.